“Hardwood felling now makes up 50% of Euroforests’ core business in the South of England where we are regularly involved with large scale projects, working with landowners to remove thousands of tonnes of dead/dying Ash.”

Ash dieback is a relatively new disease with cases first identified in mainland Europe roughly 30 years ago.  Large areas of Ash trees in Europe have since been devastated by this fungal disease which lives in leaf litter on the forest floor and when sporulation occurs in Summer and Autumn, the spores are blown on the wind for many miles.  When these spores land on a healthy Ash tree the spores initially enter the leaf structure and start to grow and develop. Over time the disease effects the entire tree and repeated infection will eventually kill the tree, as the disease stops water reaching the crown causing the tree to die. 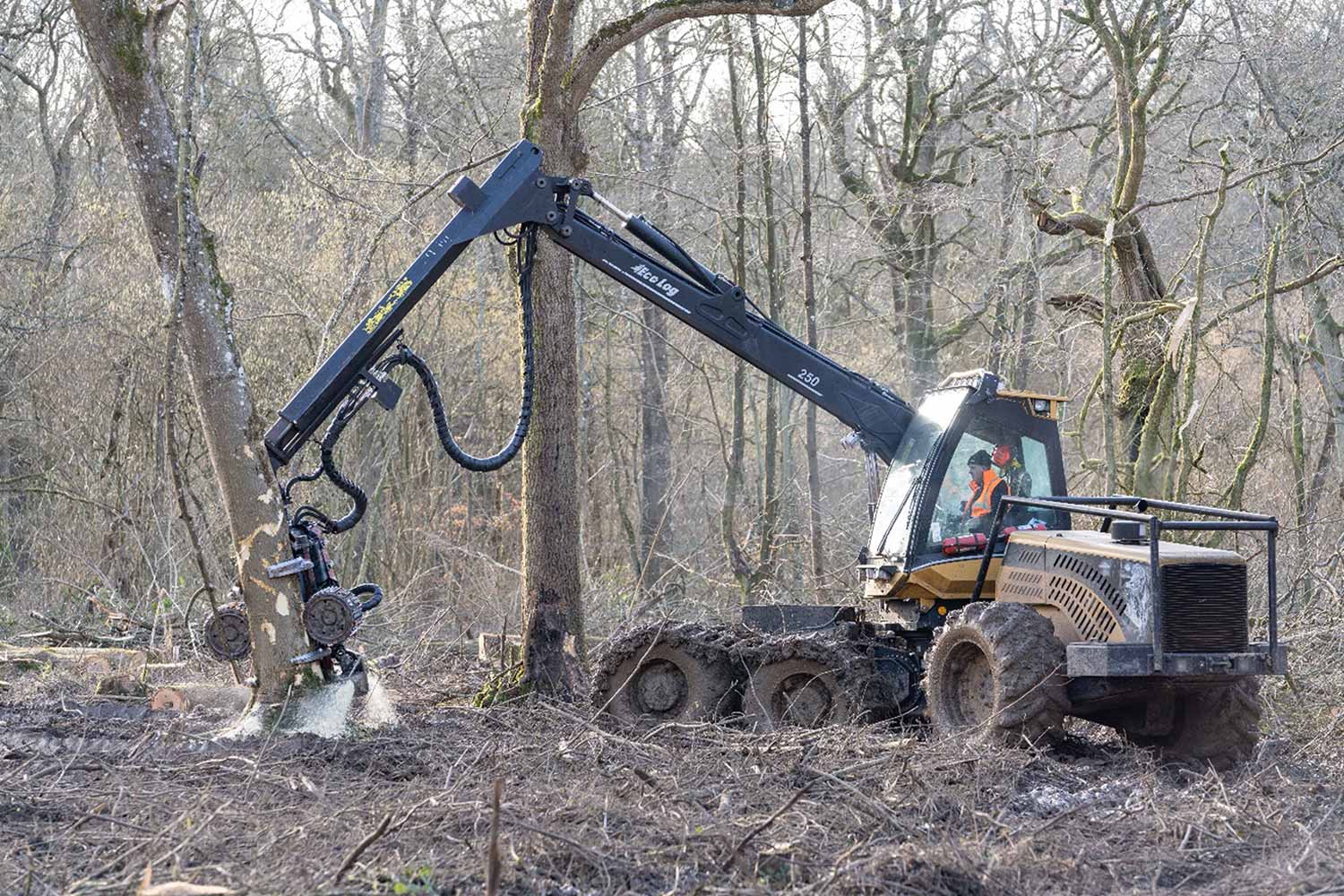 Mechanised harvesters are used to fell the infected trees wherever possible, minimising the need for chainsaw operators.

As this is a new disease in Europe and the UK, Ash trees as a result have not developed any immunity.  Its impact on the species has been and will continue to be devastating with over 80% of Ash trees in the UK expected to die.  The disease was first documented in the UK in 2012 in the Southeast, likely blown across from mainland Europe.  Over the next decade the disease has steadily advanced across the UK to Wales and Ireland, and further North to Scotland where cases are present and clearly evident in the landscape.

Once the tree is infected the speed of decline and death can vary depending on its age, proximity to other ash trees, and further exposure to the spores.  As the trees becomes stressed through the impact of the disease it weakens the tree and makes it more susceptible to other diseases like honey fugus which can further hasten its demise.  As the disease is relatively new to the UK, landowners took time to understand the seriousness of this disease and the likely rate of decline and associated Health and Safety risks.

Ash makes up 12% of broadleaf woodland in the UK and it is estimated that there are between 150-180 million individual ash trees growing either as stands of Ash, in mixed broadleaf woodland or single trees growing in all locations especially hedge rows or specimen trees.   Euroforest have been heavily involved in Ash dieback in recent years and have become the go to service provider for landowners who have identified the Health and Safety risks Ash dieback poses to all land users.

Euroforest have worked closely with landowners across the South of England and have developed considerable business offering Ash clearance work.  Hardwood felling now makes up 50% of Euroforests’ core business in the South of England and we are regularly involved with large scale projects working with landowners removing thousands of tonnes of dead/dying Ash. We also offer a service to smaller landowners who might only need to remove a few high-risk trees from their land. 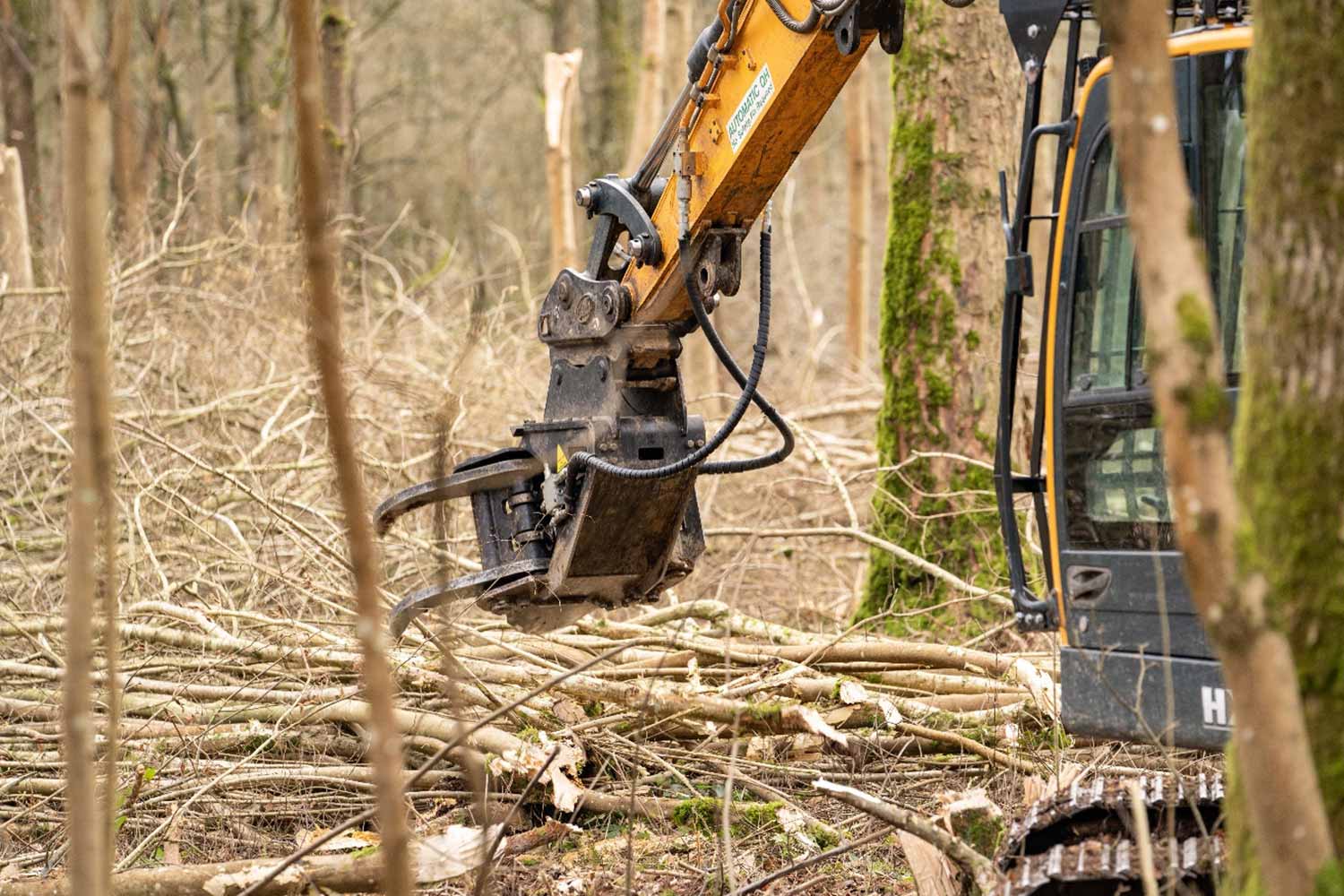 Excavator based tree shears are often utilised to clear the understory of young Ash trees. 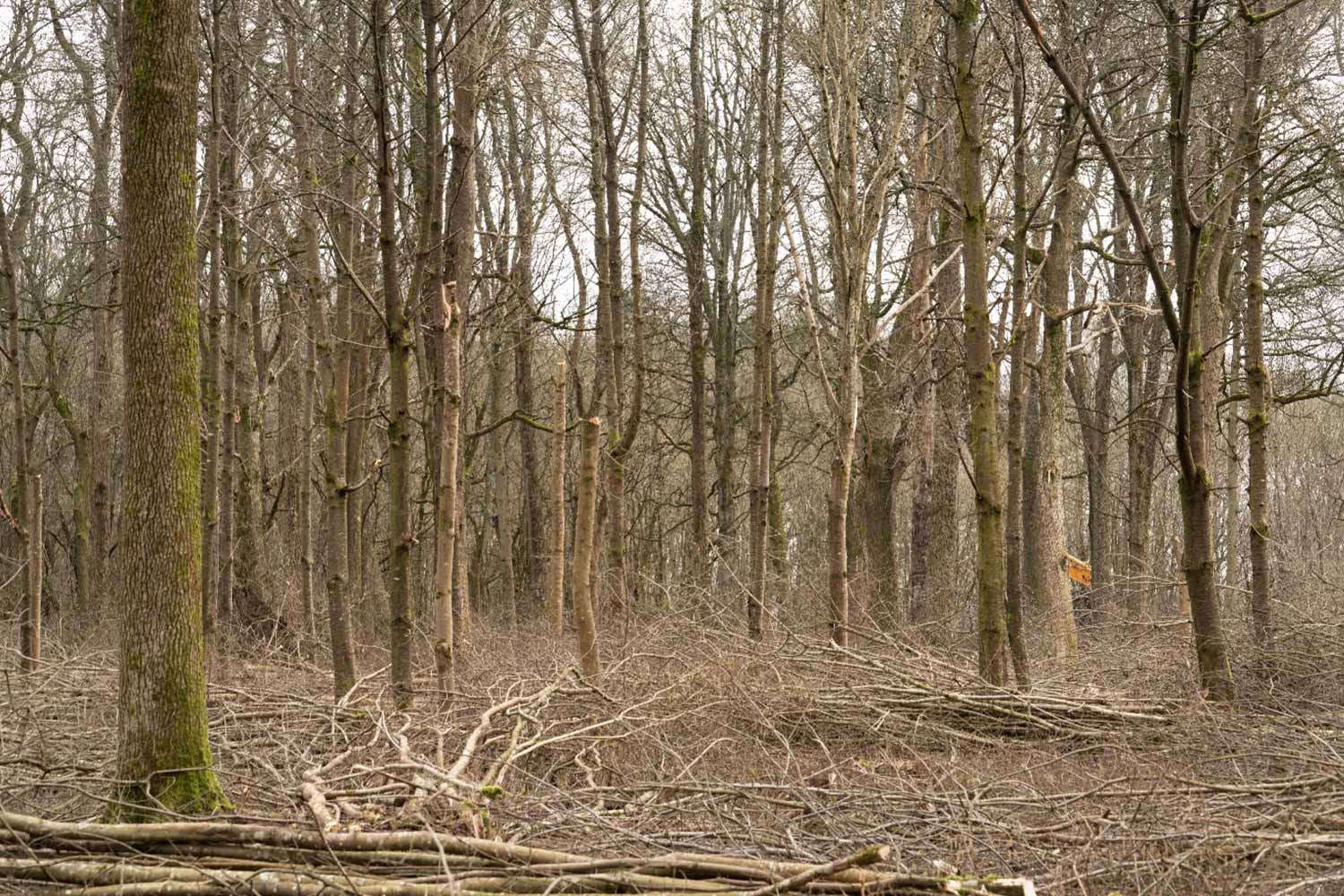 Small diameter Ash trees harvested by stump shears ready for extraction by forwarder to roadside for chipping and sale to the biomass industry.

What can the landowner expect when contacting Euroforest: 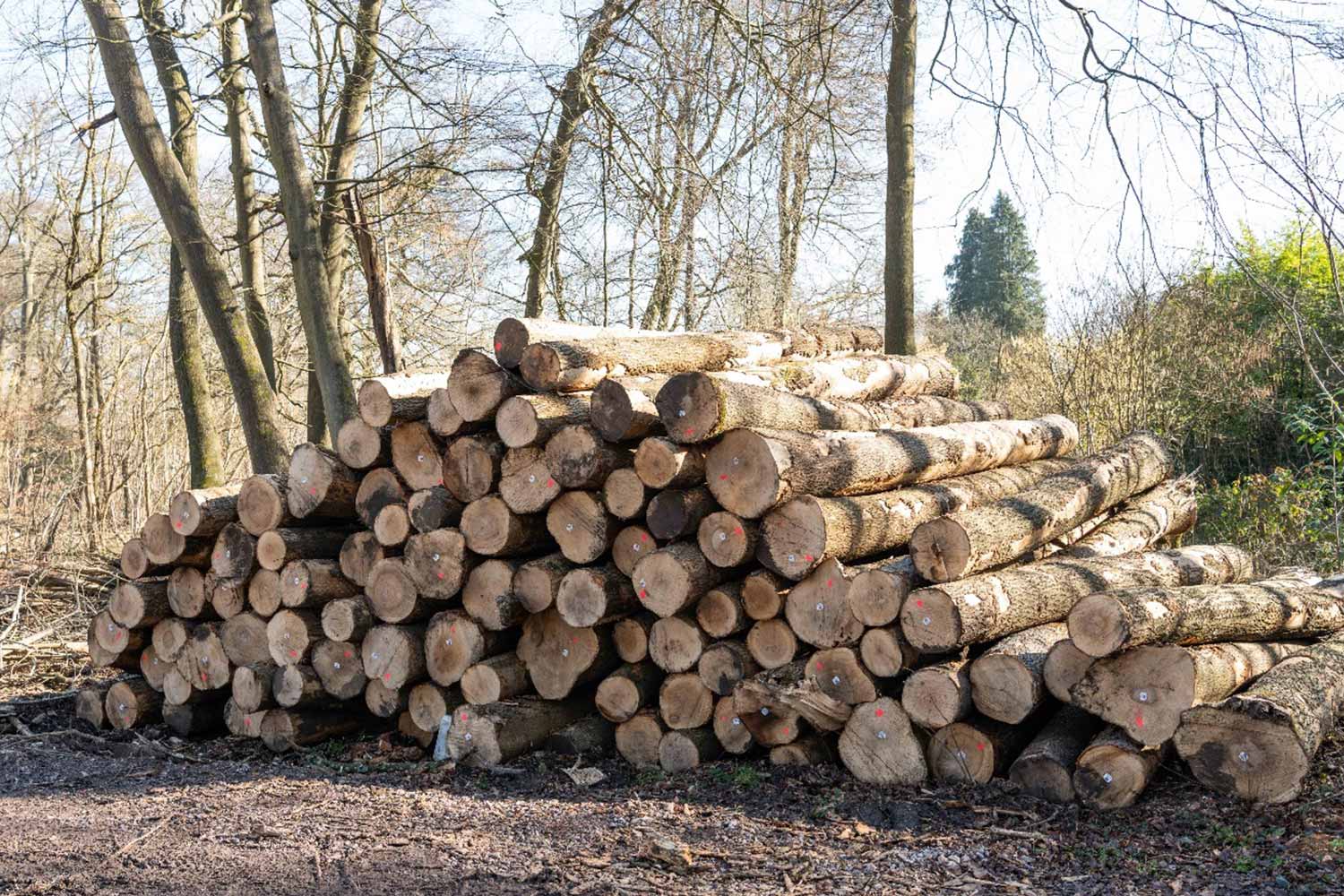 High value Ash logs are sold to local markets or containerised for export. 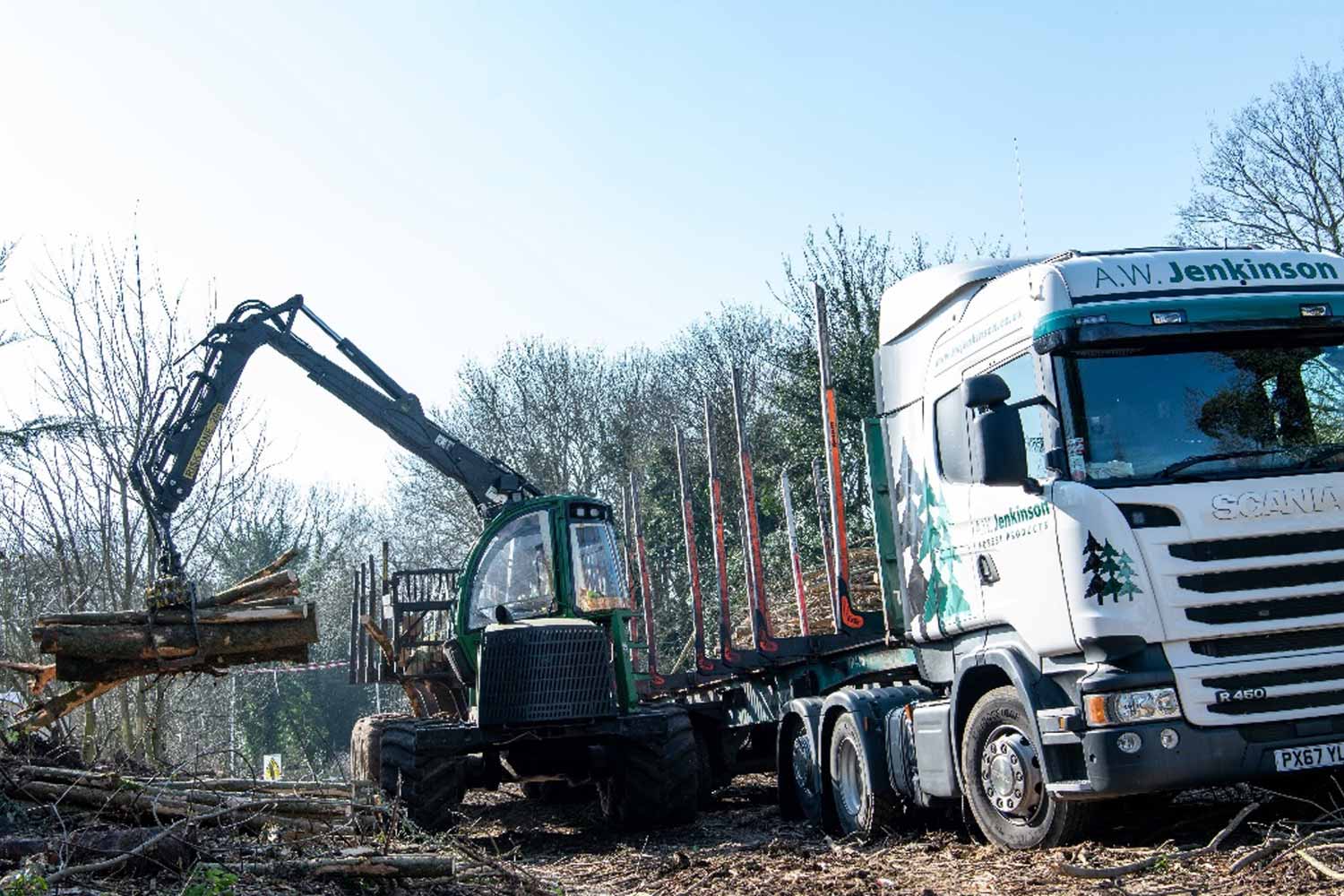 If you require any more information or would like to speak to one of our team about a specific Ash related project, please find your local area manager via or Contact Us page or get in contact with your local Euroforest office by clicking one of the links below:
‍
Huntly Stirling Carlisle Talgarth Bentley Kent 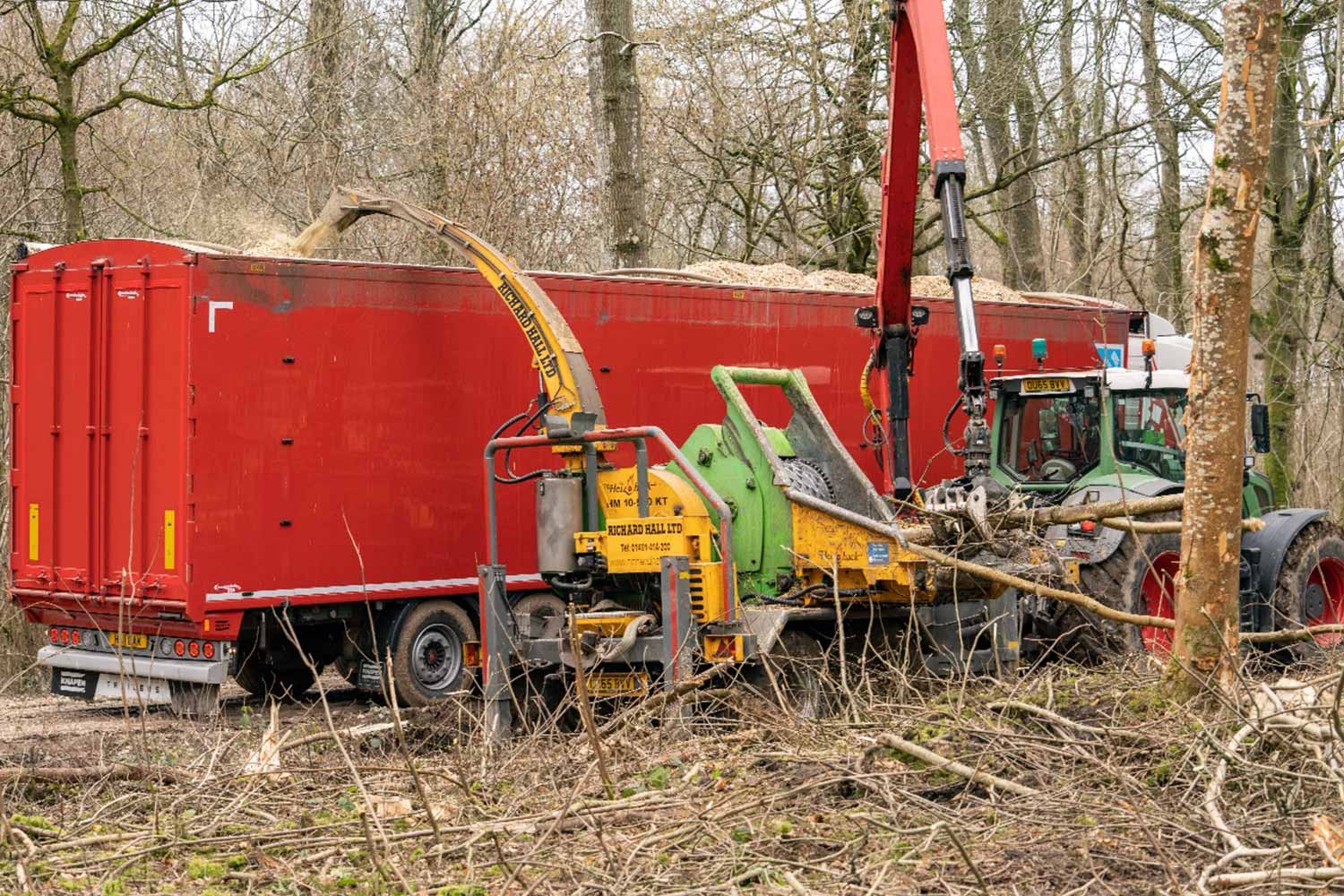 Small diameter Ash trees and tops are brought to roadside ready for roadside chipping and sale to Kent Renewable Energy through our Euroforest supply contract.  This enables Euroforest to offer the best value to our clients.